A $1.2 million grant from the JDRF will support University of Arizona researchers as they continue to perfect and test an implantable “tea bag” that senses glucose levels and automatically releases insulin when needed. 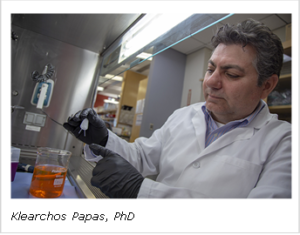 Children with Type 1 diabetes have only one option to control their blood sugar: insulin treatment. Ravaged by an autoimmune disease that attacks their own pancreas and islets — microscopic clusters of cells that sense blood sugar and produce insulin — patients are forced to rely on insulin from an external source.

But for the 200,000 youth living with Type 1 diabetes in the United States, insulin shots, pens and pumps fail to perfectly manage blood sugar, which may lead to long-term complications. When the body fails to tightly regulate sugar levels, like in diabetes, much can go wrong.

“The absence of this natural ability — minute-to-minute regulation of glucose levels — can result in long-term complications, such as blindness, amputation and kidney failure,” says Klearchos Papas, PhD, a professor in the Departments of Surgery and Medical Imaging at the University of Arizona College of Medicine – Tucson. “Even with automated insulin delivery devices and continuous glucose monitoring — the best way possible to control your blood sugar — you still can end up with these consequences.”

Dr. Papas adds, “Interestingly, if you administer insulin aggressively to help lower and keep your blood sugar in the normal range, you actually increase your risk of potentially deadly hypoglycemic, or low blood sugar, episodes.”

For the last two decades, Dr. Papas has been working on a solution to this problem. In collaboration with other scientists across the nation, the UA researcher has been developing a tiny, implantable device that senses glucose levels and releases insulin when needed.

Now, with a two-year, $1.2 million grant from the JDRF, Dr. Papas will continue to perfect and test his device in preparation for clinical trials in humans. The project, which also includes a contribution from Novo Nordisk, is in collaboration with Tom Loudovaris, PhD, of St. Vincent’s Institute, and Greg Korbutt, PhD, of the University of Alberta. 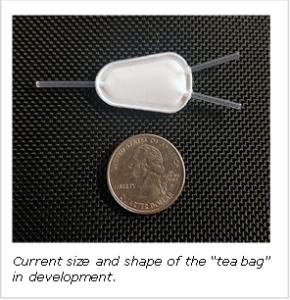 The device operates using a medical innovation known as islet transplantation. In adults with Type 1 diabetes, islets are taken from donor bodies and dripped into the patient’s liver, similar to an intravenous, or IV drip.

Eventually, these islets begin producing insulin for the body, but in order for the patient’s body to accept the transplanted cells, the patient must take lifelong immunosuppressive drugs.

Because of this need for immunosuppressive drugs, islet transplantation is not recommended in children.

“The need for lifelong immunosuppression is a major concern,” says Dr. Papas, who leads the UA Institute for Cellular Transplantation. “Children would be more susceptible to infections and lifelong treatment could cause other serious health conditions.”

To avoid immunosuppressive medications in children and adults, Dr. Papas’ device can protect transplanted insulin-producing islets from the body’s attack. Donor islets are placed inside of the implantable, tea bag-like device, which has a special exterior that shields the islets from any attacks from the immune system.

“It’s like a tea bag,” Dr. Papas says. “The tea leaves stay inside but tea, or insulin, comes out. And the tea bag keeps out the immune cells that would normally attack the islets.”

Such tea bag technology has been explored for decades but has not yet made it to patients for routine clinical use. One of the key issues that has limited the technology’s success is the large size of the tea bag — at one point analogous to a large flat-screen TV.

The professor also has developed a technology to feed oxygen to the islet cells in the tea bag for optimal health and insulin production.

“The unique thing we bring to the table is the combination of an optimized tea bag with its own oxygen supply,” Dr. Papas says. “Islets are happier with an oxygen supply; they survive and function better and this has been overlooked in the past.”

Under current plans, the oxygen generator — the size of a stack of quarters — eventually will be implanted alongside the islet tea bag. Implant locations include under the skin of the arm or back. The oxygen generator, which will use battery power, could be recharged without wires or removal from the body using a technology known as transcutaneous energy transfer.

If testing is successful with the two-year JDRF grant, Dr. Papas could launch clinical trials with the device in the next three to four years.

“This is not pie-in-the-sky crazy science,” he says. “We believe, engineering-wise, it is achievable. The cells and the biology were the difficult part and they have come a long way in the past five years.”

If taken to market, human islets from donors will be placed in the tea bags, but Dr. Papas believes that islets generated in the lab from human stem cells soon will be available. As part of the two-year study, Novo Nordisk has donated human stem cell-derived islets to test in the tea bags. If successful, stem cell-derived islets would make it easier to help treat the millions of people with diabetes.

UA President Robert C. Robbins, MD, said he is eager to see Dr. Papas and his team continue to develop this promising technology and take the device to market.

“This is an incredible example of the kind of innovative and collaborative research that is taking place on the UA campus that has only recently become possible with the convergence of the physical, biological and digital worlds,” Dr. Robbins said. “The work that Dr. Papas and his team are doing to help children with diabetes is a great example of using new technology to significantly improve quality of life for patients, and why the UA is primed to be a leader in developing digital health.”

Dr. Papas also is a member of the UA BIO5 Institute and the founder of Procyon Technologies LLC.