Valley fever cases in November saw a 50-percent spike over the previous month, leading experts at the University of Arizona Valley Fever Center for Excellence to predict a significant increase in cases in 2018.

Fortunately, the recent—and timely—approval of a new rapid assay test for Valley fever, developed with assistance from the University of Arizona, should reduce delays in diagnosing the respiratory fungal infections—a frequent problem in treating the disease, which is caused by spores endemic to soils in the U.S. Southwest. 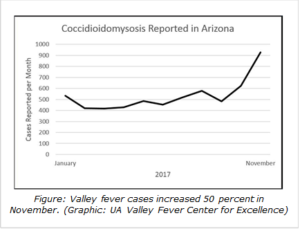 The number of new Valley fever infections reported to the Arizona Department of Health Services has been relatively stable since 2013, but that may be starting to change, said John Galgiani, MD, director of the UA Valley Fever Center for Excellence and head of the Banner – University Medicine Valley Fever Program. For example, in November, more than 900 cases were reported, a 50-percent increase compared to October and the highest monthly total in the past two years. Although Arizona’s total number of cases for 2017 are only slightly more than in 2016, the accelerating monthly case numbers suggest the state may see a sharp increase in cases next year, he said.

Patients who develop persistent symptoms of pneumonia, such as fever, cough, chest pain, or shortness of breath, especially if associated with unusual skin rashes, joint pain or extreme fatigue, should ask their doctor whether they should be tested for Valley fever. In 2011, more than 16,000 Valley fever infections of Arizonan residents were reported—a record for the state. In fall 2010, signs of that increase already were present, Dr. Galgiani said.

Earlier this month, the U.S. Food and Drug Administration gave regulatory clearance for a molecular assay test for rapid detection of coccidioidomycosis (Valley fever, or cocci) usingDxNA LLC’s GeneSTAT.MDx Coccidioides test and GeneSTAT System. That test (which reduces the time for results from as long as 21 days to the same day and without need for a Biosafety Level 3 lab to do culture testing) was developed using data licensed from the Translational Genomics Research Institute (TGen) and Northern Arizona University.

Physician Feedback Needed in Response to NEW Prior Authorization Process