Results of patient-ordered tests for Valley fever are showing disease activity, indicating a possible second spike in cases of the respiratory ailment since last fall when the first spike was reported by University of Arizona infectious diseases specialists to have occurred. 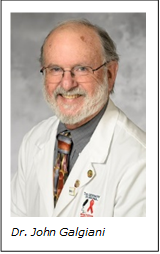 is rising at least two months sooner than are total cases reported to the state. This increase ahead of state statistics is especially pronounced with results for the “early antibodies” test, a term used on the patient-ordered results that usually indicates recent or current infection. Patient-ordered lab tests are referred to as direct-access testing or “DAT.”

In the accompanying graph, the percentage of positive early antibody results—shown as hatched bars—began to rise in September, two months ahead of the state numbers. They have been rising from March to present, while the state numbers have not yet shown that increase.

“This pattern suggests cases of Valley fever are increasing in Phoenix and in Maricopa County, where most DAT tests were ordered, and probably elsewhere such as around Tucson and Pinal County where seasonal Valley fever rates closely follow Maricopa,” said PCMS member John N. Galgiani, MD, director of the Banner – University Medicine Valley Fever Program and the UA Valley Fever Center for Excellence, and professor of medicine at the University of Arizona Colleges of Medicine in Tucson and Phoenix. “Right now,” he added, “residents, doctors and visitors in these areas should be on a greater lookout for Valley fever.” 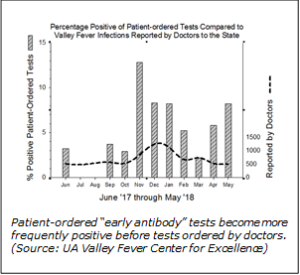 Although this pattern looks real, people should be cautious about over-interpreting it, Dr. Galgiani said. “The ability for patients to order their own Valley fever tests has been available for less than two years and the numbers are not very large—many fewer than those that currently come from doctors doing the ordering. However, the increases in the early antibodies results are showing up exactly when we expect the seasonal increases to occur based on previous studies.”

Other factors also should be weighed, he stressed. Since anyone can order their own tests, it isn’t yet known what motivates patients to do this. Sonora Quest provides guidance of when the test is appropriate to order, but it’s the patient who makes the decision to be tested. Yet how Valley fever affects people varies—some may show few if any symptoms while others become critically ill. Thus, a positive result for someone otherwise healthy may affect the interpretation.

Another difference is that DAT results are based on the percent positive of total tests done, while state statistics usually show only the number of positives—not as a percentage of all tests performed. Whether these differences are important now is under study by the Arizona Department of Health Services working with more of Sonora Quest’s Valley fever test results.

For now, though, predictions of higher than usual Valley fever activity this year are holding true. Through the end of May, State of Arizona statistics show 3,717 new Valley fever cases for 2018. This is 60 percent higher than a year ago at the same time, a trend first noticed last winter.

In 2015, the State of Arizona passed a law to allow any consumer to purchase a laboratory test without a physician’s order. In fall 2016, Sonora Quest Laboratories began offering a Valley fever screening test on their DAT menu. Requests for the Valley Fever Screen have continued to increase since first becoming available.

The Banner – University Medicine Valley Fever Program is a collaboration between the UA Valley Fever Center for Excellence, Banner Health and Sonora Quest Laboratories. The program focuses on reducing delays in accurate diagnosis of patients who develop Valley fever, optimizing their medical care and providing a platform to conduct research and clinical trials to improve understanding of the disease. Studies currently under way address the value of early antifungal treatment and differences in patients’ immune systems and genetics that are responsible for disease severity.