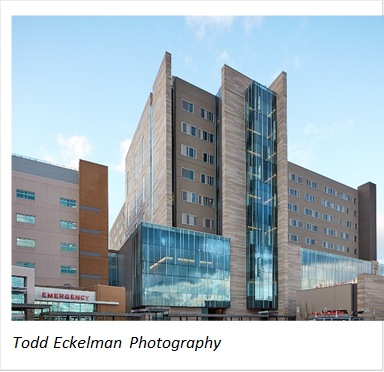 “It’s a once-in-a-lifetime opportunity to move into a new building like this,” he said. “It gives us the opportunity to transform the patient-care model to deliver a truly collaborative, team-based approach to care,” he said.

“Banner has built the Tucson community and the University of Arizona a beautiful new hospital that will be a state-of-the-art learning ground for future generations of UA physicians, nurses and scientists,” said UA President Robert C. Robbins, MD. “It’s a realization of the promise and potential we envisioned four years ago in our academic affiliation with Banner Health.”

The new tower, which includes $50 million in new patient-care equipment and computer technology, replaces older sections of the original hospital building, which opened in 1971 as University Hospital.

Then, as now, the hospital serves as the primary teaching hospital of the University of Arizona College of Medicine – Tucson. It has been recognized as a U.S. News and World Report “Best Hospital” every year for more than two decades.

“Banner’s hospital tower is an incredible gift to and investment in medical education in Arizona,” said Irving L. Kron, MD, a cardiothoracic surgeon and interim dean of the UA College of Medicine – Tucson. “Our medical students and physician residents will learn the art and science of medicine in this first-class clinical facility designed around patients’ needs. It’s the teaching hospital of the future.”

The hospital’s main lobby and entrance will shift to the new tower, which is surrounded by ample surface parking and nearby covered parking. Valet service will be available at this new entrance. The main thoroughfare onto the hospital campus is now at Campbell Avenue and East Elm Street.

The tower’s entire fifth floor will be devoted to Women’s and Infant Services, with 12 light-filled labor and delivery suites and 24 maternity rooms. Other tower features include:

“The original hospital served Tucson and the University of Arizona well for nearly 50 years,” said Sarah Frost, CEO of Banner – University Medical Center Tucson. “But our new tower is the hospital of today and tomorrow. Our patients, our physicians, our staff and students will find it spacious and cutting edge, yet friendly and healing.”

Frost thanked the hospital’s staff, its neighbors, EMS workers and the community for their patience during nearly four years of construction on the busy Banner – UMC campus, which also is home to Diamond Children’s Medical Center and Southern Arizona’s only Level I trauma center.

“We’re told that our tower is one of the biggest construction jobs ever undertaken in the city of Tucson,” she said. “Some days we had more than 550 workers on the work site. It’s been an enormous undertaking, but looking at the finished tower today, it was clearly worth the effort.”

The tower was designed by architects Shepley Bulfinch, engineers AEI and GLHN Architects & Engineers (Tucson). The lead contractor was Sundt I DPR.

Banner – University Medicine cordially invites the Tucson community to preview the tower’s first two floors from 9 a.m.-3 p.m. on Sunday, April 7, when the tower will serve as the starting point for Cyclovia Tucson’s spring route for cyclists and walkers.

In addition to guided tours, there will be live music, food trucks, a rock climbing wall, a zip line, giveaways and family-friendly activities just outside the tower.

Cyclovia Tucson’s three-mile, car-free route will run from the tower to the Warehouse Arts District. Banner – University Medicine is the title sponsor for this popular, free community event.