Juanita L. Merchant, MD, PhD, a renowned physician-scientist who has made paradigm-shifting contributions to understanding the gastric response to chronic inflammation and colon cancer, joins the the Pima County Medical Society and the University of Arizona College of Medicine – Tucson faculty this month as the new chief of the Division of Gastroenterology and Hepatology in the Department of Medicine.

She also is a member of the National Academy of Medicine, one of the highest honors in the field of medicine.

“Dr. Merchant is an incredibly accomplished investigator and a National Academies member who has been continuously funded by the National Institutes of Hea 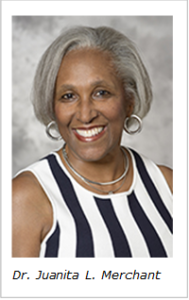 lth for 25 years. She brings academic leadership to the University of Arizona, the Department of Medicine and the GI division,” said Monica Kraft, MD, Department of Medicine chair, professor of medicine, the college’s Robert and Irene Flinn Chair in Medicine and deputy director of the UA Health Sciences Asthma and Airway Disease Research Center. “I’m very excited about having her work with me and the GI faculty to build programs and enhance education as well as move the research endeavor forward.”

Dr. Merchant previously was the H. Marvin Pollard Professor of Gastrointestinal Sciences in Internal Medicine, with a dual appointment in the Department of Molecular and Integrative Medicine, at the University of Michigan Medical School, where she also was associate director of its Medical Scientist Training Program, or MD/PhD program. Board certified in internal medicine and gastroenterology, she practiced medicine at Michigan Medicine (formerly University of Michigan Health) in Ann Arbor.

Dr. Merchant grew up in Los Angeles and attended Stanford University for undergraduate studies, later earning a medical degree and doctorate at Yale University School of Medicine. She completed her residency in internal medicine and a clinical and research fellowship at Boston’s Massachusetts General Hospital, as well as a clinical gastroenterology fellowship at the University of California, Los Angeles. She has written or co-written more than 130 peer-reviewed research publications and is editor or co-editor of multiple books and book chapters.

Dr. Merchant’s lab will be in the UA Cancer Center because her research focuses on molecular mechanisms underlying normal and cancerous epithelial cell growth in the gastrointestinal (GI) tract’s lining. Often, Helicobacter pylori — a common bacteria that is part of the makeup of the gut’s microbiome — is involved, she said. In most people, H. pylori causes no symptoms. In others, it contributes to chronic inflammation associated with gastritis, ulcers and cancer.

“My research is asking the question of how chronic inflammation changes the epithelium so that it favors development of cancer,” she said. “Some of our recent work and articles already submitted look at a specific white cell circulating in the blood that, once it’s in the stomach, changes its phenotype and begins secreting specific molecules creating an environment ripe for cancer.”

Another aspect of her research involves the role of butyrate. “It’s known that the health of our cells in the colon depends on production of butyrate by bacteria digesting dietary fiber,” she said. “So, to understand how that happens means we need to understand what families of bacteria normally are there that are protecting us – except when we develop disorders like inflammatory bowel disease, irritable bowel syndrome and, then, of course, cancer.”

Her longest-running research project involves developing a better understanding of neuroendocrine tumors (NETs) in the small intestine, rectum and pancreas that largely affect Caucasians over age 50. In the GI tract, a subset of these NETs called gastrinomas can develop in the lower part of the stomach, duodenum and pancreas. Dr. Merchant and her research colleagues wrote an article for the journal Gastroenterology’s December 2017 issue that changed thinking about these tumors’ origin from endocrine cells that are part of the lining of the intestines to enteric glial cells similar to those found in the brain, which under certain micro-environmental conditions start to secrete hormones like gastrin-causing gastrinomas.